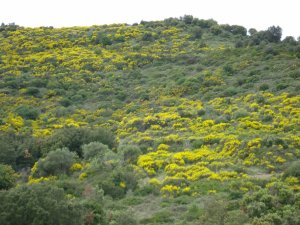 The garrigue which covers most uncultivated areas of land around the Mediterranean looks at its best in spring. This is the time of year when the plants flower, before dying back and ‘hibernating‘ during the dry summer. There is another burst of flowering after the first rain in the autumn, but April and May is the time when rosemary, thyme, broom and cistus – the most dominant flowering plants – are at their most colourful.

The word ‘garrigue‘ is a French word which comes from the Occitan ‘garriga‘, land where only the oak – ‘garric’ – will grow. This is also said to link back to Celtic languages and the word for rock (‘caer‘ in Welsh). Other parts of the Mediterranean have different names for the same vegetation – ‘tomillares‘ (from the Spanish for thyme, ‘tomillo’, I suppose) in Spain, ‘phrygana‘ in Greece, ‘batha‘ in Palestine.

Areas of garrigue symbolise these rocky hillsides so much that you might think they were natural but in fact they are the result of human activity over thousands of years. From the time of the earliest settlements around the Mediterranean, people have cut down trees for firewood and cultivated the fruit trees and herbs which they found. Their sheep and goats have grazed the land for centuries, too. The loss of the forests has led to erosion of slopes leaving only the lower, hardier, less water-demanding plants which make up the garrigue.

The result is a mix of plants, most of which are evergreen: holm oak (evergreen oak), olivettes (small wild olive trees), broom, arbutus, rosemary, thyme and other herbs, and a colourful display of flowers in spring from asphodel, orchids and numerous small plants which grow wherever they find space. 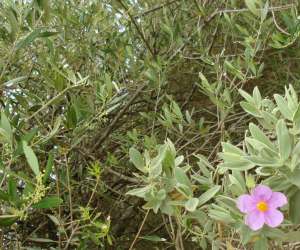 Extensive fires have been in the news around the Mediterranean in recent years, in France, Greece, Portugal and elsewhere. These are frightening and dangerous, and often caused by people‘s carelessness (cigarette ends thrown from cars, picnic barbecues, and so on) and their colonising of previously wild areas, but some fire is also a natural part of the life-cycle of Mediterranean plants. Small areas of fire can be beneficial, clearing land for new growth. It is said here that the best places to find wild asparagus are where there have been fires in the past year or so.

Some other spring wild flowers: 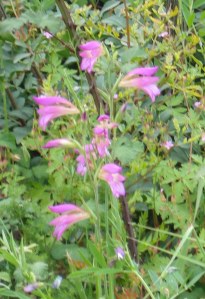 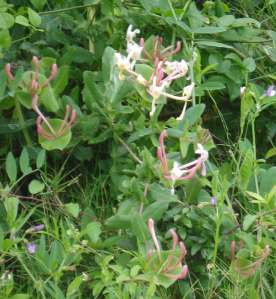 honeysuckle
Flowers of the Mediterranean by Oleg Polunin and Anthony Huxley (Chatto and Windus, 1967) is the book I use for identifying Mediterranean plants – It’s an excellent book with colour photos and good descriptions. I think there are newer editions and that it is still available.

There is a good article in French about the garrigue here as well as other interesting nature articles about the Languedoc on the same website.

And a short article in English here on the history of the garrigue.

And in autumn and winter …. 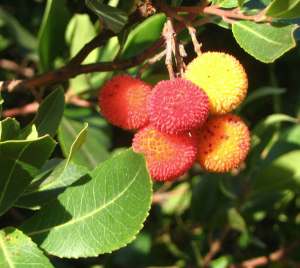