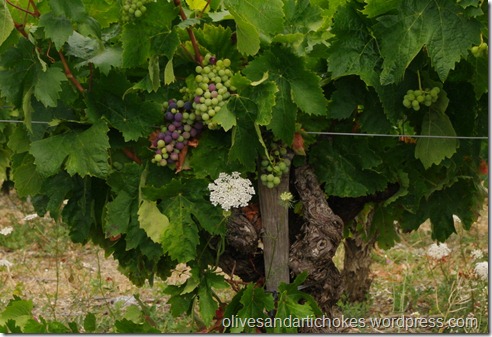 The Languedoc has been described as the biggest vineyard in the world, and in this vineyard the grapes are beginning to ripen ready to make this year’s red wine.  I spotted these on the way back from Roquessels after buying wine at our favourite domain d’Estève.  These red grapes won’t be picked until September, so they still have plenty of time to develop and ripen.  The white grapes will be picked around the middle of August, often at night as they need to be kept cool until they are pressed.

Yes, aubergines again!  We’ve found that one good way to preserve a glut of aubergines is to pickle them.  We then eat the pickle during the winter as an accompaniment to grilled meats, as a vegetable rather than a condiment.  We had a kilo and a half of aubergines as well as the couple we wanted to eat today, so I made the first four large jars of pickle. 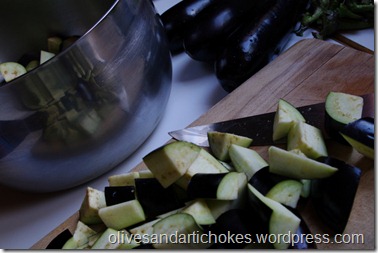 I roughly chopped the aubergines, about a kilo of tomatoes and a large sweet onion (which weighed about 700 grams) and combined them all in a pan with a soup spoon of salt, two teaspoons of paprika,  a few bay leaves, 500 ml of red wine vinegar and 500 grams of sugar. 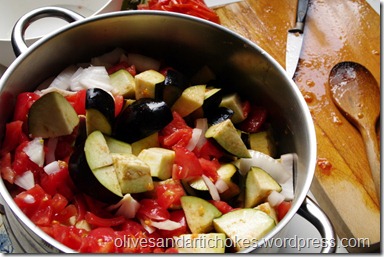 I brought the mixture to the boil and simmered for an hour and a quarter covered followed by 15 minutes uncovered. 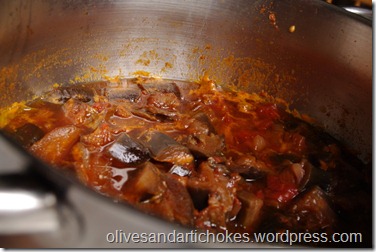 While it was still hot I poured it into large sterilised jars and now it’s ready to be kept in the store cupboard for winter while we enjoy the fresh aubergines that we’re picking daily. 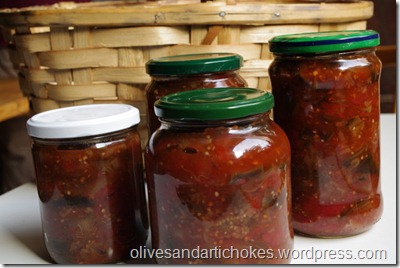 When I moved this blog to WordPress a couple of months ago I also moved my recipe blog because I had separated the two a few years ago.   With the new view on my blogs that the change has given me the separation now seems rather artificial and arbitrary because so much of what I have to say about the garden is connected with what I want to say about food and the recipes I write.  So, I’m thinking of combining recipes, food and gardening on this blog from now on, although the Food from the Mediterranean blog will remain as a source of reference for previously posted recipes and maybe the occasional new one.  I’d like to know what you think about this.

7 thoughts on “The grapes are ripening”