This morning we hoped to have coffee in the café at Faugères whose terrace has a view of the Pyrenees.  In spite of the sunshine and temperature of 15C the wind was a bit chilly for sitting outside and the Pyrenees were not visible because of cloud. I couldn’t blur the difference in sky colour from east to west so the panorama didn’t stitch together very well and I’m posting three of the shots I took from the same spot. The clouds in the distance mark the mountains – it is often possible to see the clouds on the Pyrenees rather than the mountains themselves.  From the sea in the east,

south towards Mont Canigou and the rest of the Pyreneean range,

and west towards the nearer hills with their stone walls and goatherds’ shelters.

It was a nice surprise to find that the ﻿caveau﻿ was open on Sundays, so we bought wine – some white Domaine de Coudougno and some red Les Fonts de Caussiniojouls – and found this old piece of wine-making machinery on the terrace outside.  I think it was used for separating the grapes from the stalks and leaves. 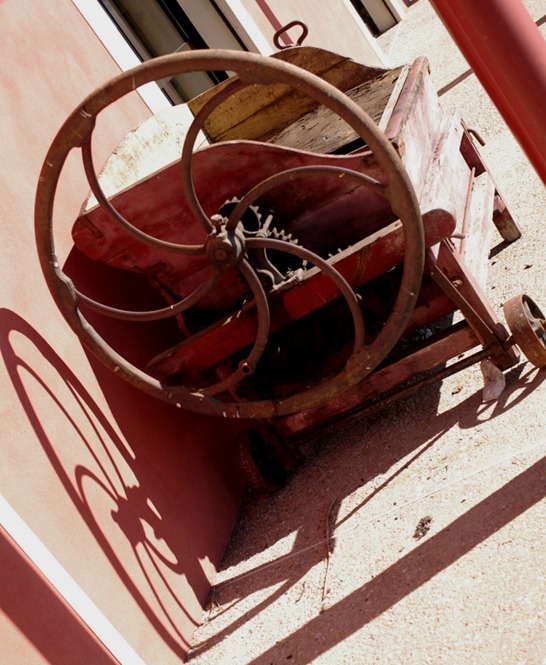 And then it was time to go home and light the barbecue out in the place to cook lamb chops, onions and peppers. 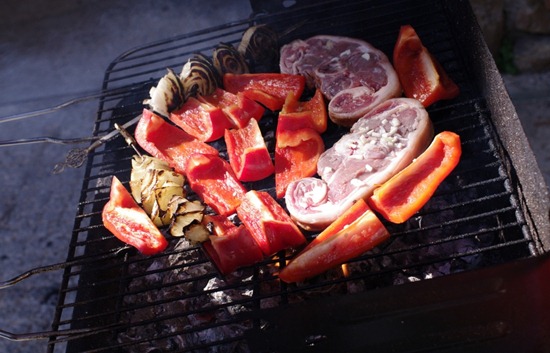 It was warm enough to leave the door open next to the table where we eat:

and the lamb chops, from one of the two excellent butchers in Roujan, were tender and delicious, served with the grilled vegetables, rice and yogurt mixed with chopped garlic and paprika.

6 thoughts on “Wine, vistas and lunch”