I bought another bouquet of small artichauts violets in the market and Lo Jardinièr asked me to do them ‘as I usually do them’.  Well, he should know that I rarely do exactly what I’m asked to do and I couldn’t resist trying something new with these, something very simple that may have been done by someone before me, but it was a first for me.  I cut the ends of the leaves, trimming down to the heart, peeled off the outer leaves and removed what little choke there was, all the time covering the cut edges with lemon juice to stop them browning.  I mixed a couple of tablespoons of stoned green olives, 3 cloves of garlic and a piece of stale bread in the liquidiser until they made a stuffing which I put into the hearts of the artichokes.  I then put them, stems pointing upwards, in a good layer of olive oil in a cast iron pan and added a glass of white wine and some salt and pepper, brought it all to the boil and simmered gently for about an hour until the artichokes were cooked.  Some of the stuffing escaped but that just seemed to add flavour to the oil and wine sauce.  Served cold with a slice of lemon they were delicious and luckily Lo Jardinièr agreed.

I was interested by a recent post by Cooking in Sens and the comments that followed about whether or not chefs ‘invent’ recipes.  As she says, ‘In cooking, there is really nothing new under the sun.’  But recipes do not always have to come from books or television programmes, or even the Internet.  I love cookery books and books about food and I have shelves of them – by Elizabeth David, Claudia Roden, Madhur Jaffrey, Giorgio Locatelli, the Moro couple, and many many more – but I rarely follow a recipe.  I use the books as inspiration, added to the knowledge I’ve amassed over more than forty years of cooking, from my mother, from talking to friends, especially here in the Languedoc (where no one I know uses cookery books at all), and from my own experience and experimentation.  I think if you have a grounding in cooking, from any of these sources, and a knowledge of which ingredients go well with which others, you can be inspired, influenced and then invent.  The salad that Lo Jardinièr made for lunch, which he described as a Mediterranean salad, for its colour and flavour, is another example of this: 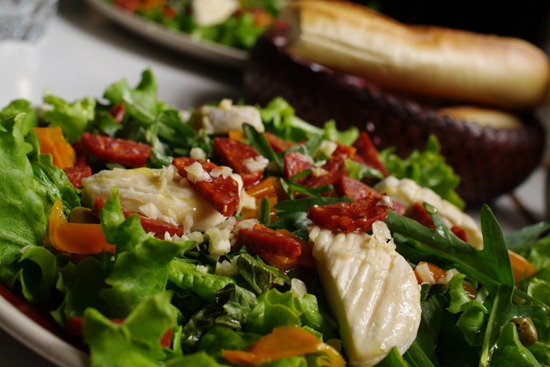 In the garden today we planted out the corn plants, a Greek variety resistant to drought, grown from seed we saved last year – we had 44 very healthy looking plants.  I also saw what I think is a Wall butterfly, looking slightly battered: 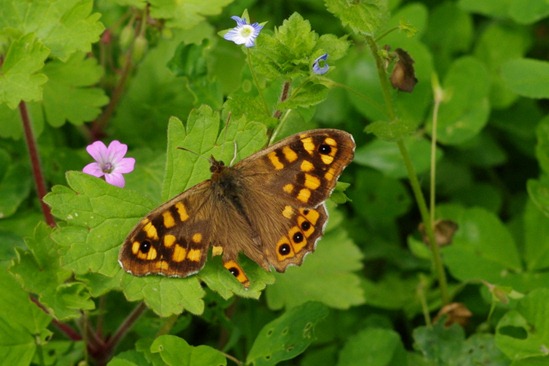 the Lucque olive tree about to flower: 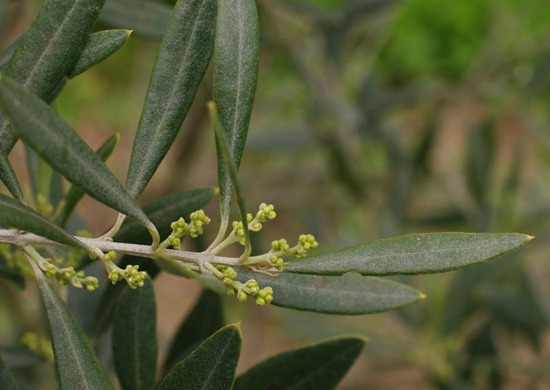 a snail enjoying a good meal of rosemary – we have plenty, we can spare some! 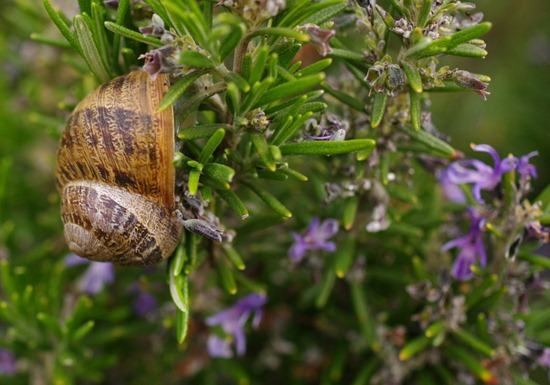 and some tiny wild violets: