As we often do on a Thursday afternoon we bought a kilo of mussels from the producer’s van that comes from Bouzigues twice a week. Wondering how to cook them I was leafing through Patience Gray’s wonderful book, Honey from a Weed: Fasting and Feasting in Tuscany, Catalonia, The Cyclades and Apulia, when I found her recipe for cozze al forno, stuffed mussels in the oven, with breadcrumbs, garlic, parsley and parmesan.  This gave us an idea which with some small changes to the original recipe became our supper.

We cleaned the mussels and cooked them in a glass of white wine until they were all open.  While they were cooking we added chopped garlic and finely chopped fresh green pepper (from the garden) to some breadcrumbs.  When the mussels were cooked we removed the empty half of the shell, covered the mussels with the breadcrumb and pepper mix, poured some olive oil over each mussel and covered them with finely grated parmesan cheese.  We browned them under a hot grill and they were ready to eat. 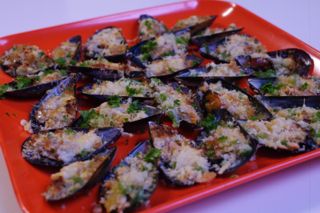 A kilo of mussels probably would make a first course for four but we do like mussels a lot, so we ate a kilo between the two of us, followed by pasta with capers and anchovies.

Patience Gray also has a delicious Catalan dish of mussels with fresh tomatoes which I plan to try as soon as we have a few more ripe tomatoes in the garden.

(Sorry my photos are smaller than usual – I’m getting used to a new computer and hoping I’ll get the hang of it very soon!)

8 thoughts on “Mussels with Parmesan”