This morning after a cold night and an early frost on the roofs in the village, the sun felt warm, the birds were singing and some seemed to be nesting in a bay tree on the edge of the village.  This mimosa tree, whose flowers are one of the first signs of spring here, is already covered with small yellow buds that should open into flower in about a month’s time.

With our family arriving tomorrow for New Year celebrations, I wanted to try the Lactarius deliciosus mushrooms I pickled a couple of weeks ago.  I simply took a few slices out of the jar, poured some olive oil over them and added some chopped parsley.  They were very good and would probably be even better with a little chopped garlic – definitely something we can offer to visitors!

I went out shopping this morning and bought white wine from the Domaine des Pascales and olive oil from the Moulin de Casso, both in the village.

Anyone with romantic images in their mind of old stone grinding the olives might be disappointed, but this is what an olive mill looks like now.  Inside the modern agricultural building there is a small modern olive press, gleaming metalically, while olive growers bring trailers of containers of olives for milling, driving through and out at the other end after dropping off their cargo.  There are more photos of the mill, posted when it first opened two years ago, here.  This year hasn’t been a good one for the olive crop, here in the Languedoc or in other areas around the Mediterranean, so I hope we don’t run out!  The mill had enough left for me to buy a 2-litre bottle.  Although I use the more plentiful and cheaper Spanish oil for cooking, it’s nice to have a local and very tasty one for salads.

The white wine is a stand-by, always in our fridge for cooking and sometimes for drinking.  Today I used it to poach some pears for dessert this evening when we have friends coming for supper.  I’m soaking some saffron threads to stir into crème fraîche to go with them.  The rest of the menu, dishes which I won’t photograph because we’ll have friends waiting to eat them, will be foie gras that we preserved in jars after our trip to the Gers last March, pork carbonade slow-cooked with onions, tomatoes, garlic and olives, served with baked potatoes, and then cheese before the poached pears.

These mushrooms count as local, or fairly local anyway.  They were given to us by a friend who’d been given them by a friend of his who had picked a lot.  So it’s third-hand foraging.  They are Lactarius deliciosus, Saffron Milk cap as they are known in English.  From my point of view, one of their great advantages is that there is, apparently, no poisonous variety with which they can be confused.

They’re good simply fried in olive oil and served with chopped garlic and parsley.  But we had far to many to eat them all like that, so I decided to pickle the rest. 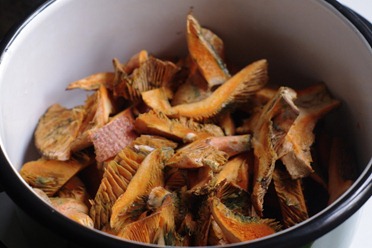 I sliced them, put them in water and simmered with a couple of paprika peppers until they were soft – these took about half an hour, but other kinds of more delicate mushrooms would cook much more quickly.  While they were cooking I mixed 1 cup of white wine vinegar, 1 cup of water and 1 1/2 cups of sugar, added some bay leaves and some peppercorns, brought the mixture to the boil and simmered for about 10 minutes.  I sterilised some glass jars in the oven (10 minutes at 140 C) and the seals in the some boiling water.  When the mushrooms were cooked I drained them well on kitchen paper and packed them into the jars.  Finally, I covered them with the vinegar mix and put the sealed lids on.  I haven’t made these before but I think they’ll be nice dressed with olive and eaten as tapas.

After this I was hungry but hadn’t planned anything for lunch so I made Mediterranean style oeufs en cocotte, with olive oil instead of butter and some crumbled blue cheese on top.  It worked, garnished with chopped parsley and garlic, of course! 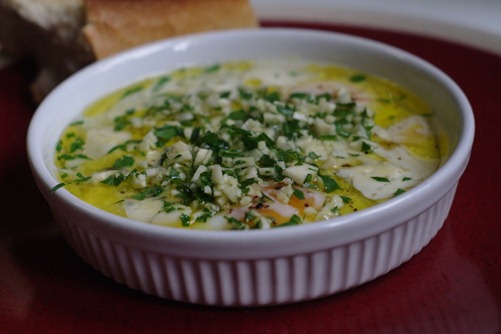 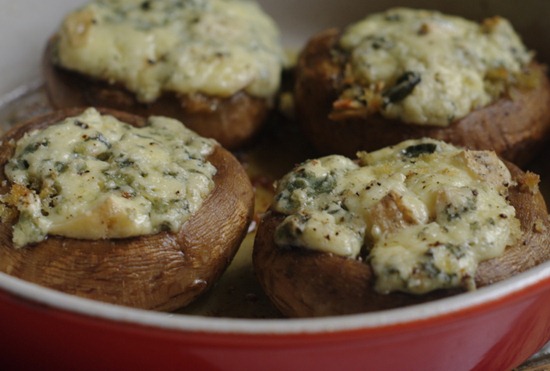 Is life really too short, as Shirley Conran claimed, to stuff a mushroom?  These large champignons de Paris, as they are called in France, took me just a few moments. I removed the stalks to save for using in a tomato sauce later, filled the centres with a mixture of fresh breadcrumbs, chopped garlic, salt, pepper and olive oil and crumbled some Bleu d’Auvergne cheese on top.  Then I put them in the oven for half an hour while Lo Jardinièr was out in the place sharing the barbecue with our neighbour to cook the pork for lunch.  A few minutes under the grill to brown the cheese, and the mushrooms were ready too.  It seemed a good way to spend time that, as Samuel Becket’s Estragon said, would have passed anyway.

In the garden this morning we found a few little pockets of snow remaining amongst the straw we put around the broad beans to protect them. The broad bean plants look a bit sad. They were all doing so well, but they’ve been badly affected by the cold nights we’ve had. If these leaves don’t recover the plants will probably grow up again from the base… I hope.

Fallen passiflora leaves frozen to the table and our neighbour’s almond tree silhouetted against the clouds. It’s hard to believe that within about a month this tree should be blossoming.

It’s hard to believe, too, that we often eat lunch in the garden, in sunshine, in January. Today we came home as soon as we could to this warming velouté of mushroom and squash (the recipe is on this French/Greek blog). It was delicious with Aveyronnais bread from our local boulangerie.

The work that needs doing in the garden – mostly clearing ground so that we can put goat manure on it – will have to wait until the weather gets warmer. It was still minus 2 C at 11.30 a.m. today – that’s much too cold to garden!

Market day – the busiest day in the village! The north wind felt very cold and one woman in the queue at the charcuterie stall told us that when the village Christmas tree was delivered this morning from the mountains it still had snow on its branches.

And today there was the added excitement of a huge Bulgarian lorry reversing out of the narrow street, between the stalls in the place and out onto the main road. The lorry had delivered the cobbles which will be laid in the streets in the Pioch, the oldest part of the village, which is being renovated. This caused much questioning among stallholders and customers (including me) about why stone had to be brought from Bulgaria when there are plenty of quarries nearby.

I’ve never eaten these before, but one of the advantages of shopping in the village shops or the market is that there is always someone nearby to give advice about how to cook something. So I asked, and had the simple reply that I should fry them in olive oil and add chopped parsley and garlic. So this is what we had for lunch, with pasta. The mushrooms tasted very good (although not as tasty as the cèpes we had in October) and had a nice almost crunchy texture and saffron colour.