Everything is growing so fast in the garden after all the rain we’ve had and this morning there were some exciting signs: the first tiny olives developing on our trees, a couple of small aubergines and some cucumbers. 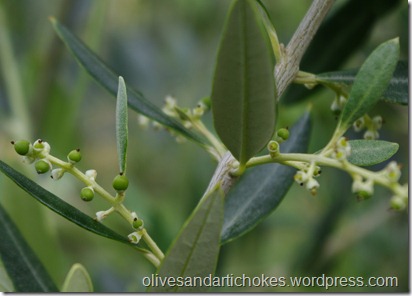 These olives will be ready to harvest, we hope, green in October or ripe and black in November or December.

One of our first cucumbers of the season….

…and a tiny aubergine.

Once again we were invited to pick cherries from our friends’ tree and this time we decided to preserve some of them in eau de vie, brandy made from the grape skins after wine-making, as we did with some of the wild cherries we picked the other day.  It’s very simple: just pack the cherries into sterilised jars, adding a tablespoonful of sugar to each layer and then cover the cherries with eau de vie, Armagnac or some other brandy.  Close the jars and leave for at least 4 months, turning occasionally to make sure the sugar dissolves.  By Christmas these will make a very good digestif.

And an excellent ending to our trip to the Gers in March, which I described here.  In March we made confit with the duck legs we bought in the market in Samatan, by covering the pieces of duck with duck fat in a pan and simmering them for 2 hours then storing them in the fat – they will keep for months like this.  Today we took the legs out of the fat and put them in a hot oven (200 C) to heat through and crisp the skin – about 25 minutes – and we ate them with potatoes and sweet onions roasted in duck fat and haricot beans straight from the garden.

The duck legs as they came out of the fat in which they were stored…..

…and after they’d been in the oven – ready to eat and absolutely delicious!

4 thoughts on “Beginnings and a very good ending”